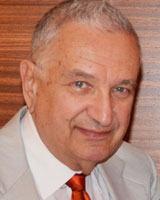 Professor Antal E. Fekete is an author, mathematician, monetary scientist and educator. Born in Budapest, Hungary in 1932, he graduated from the Eötvös Loránd University of Budapest in mathematics in 1955. He immigrated to Canada in 1957 and was appointed Assistant Professor at the Memorial University of Newfoundland in 1958. In 1992, after 35 years of service, he retired with the rank of Full Professor.

In 1959 he was Instructor in Mathematics at Columbia University in New York. In 1963 he was Visiting Professor at Trinity College, Dublin, Ireland. In 1975 he was Fellow at Princeton University, Princeton, New Jersey. In 1983 he was resident scholar at the American Institute for Economic Research in Great Barrington, Massachusetts. While on a tour of duty in the Congressional Office of William E. Dannemeyer, Congressman from California, in Washington, D.C., Professor Fekete was working on monetary and fiscal reform in the United States.

In 1995 he was resident fellow at the Foundation for Economic Education in Irvington-on-Hudson, New York. In 1996 he was Visiting Professor at the Francisco Marroquín University in Guatemala, teaching Austrian economics. He is the founder and Chairman of the New Austrian School of Economics in Hungary. Professor Fekete is a proponent of the gold standard and an outspoken critic of the monetary system based on irredeemable currency. His work falls into the school of free-market economic thought inspired by Carl Menger. He claims that his theory of interest is an extension of Menger’s work, who championed the theory of direct exchange morphing into indirect exchange. In the same way Professor Fekete is championing the theory of direct conversion of income into wealth and wealth into income (read: gold hoarding and dishoarding) morphing into indirect conversion (read: selling and buying gold bonds). He is an advocate of Adam Smith's Real Bills Doctrine that he calls the Gold Bills Doctrine.